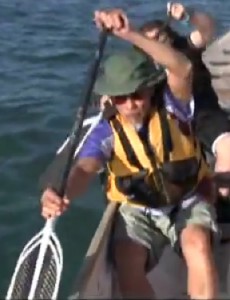 When Colorado Dragon Boat Festival (CDBF) started in 2001, Tom was captain of a racing team sponsored by the Organization of Chinese Americans (OCA) of Colorado, one of the founding CDBF organizations. His team took the Silver Medal in their division. He switched to land duty during the years 2002 – 2007, when he helped, then directed the racing event, expanding the participation from 32 adult teams (2002) to 48 adult teams and eight youth team (2006), racing over a two day period. Tom retired from directing the races in 2007 and turned his attention to taking dragon boat racing in Colorado to the next level, desiring to form competitive teams capable of racing against teams in other cities. In 2008, 2009, 2010, and 2012 he attended dragon boat training camps in Melbourne FL, offered by Great White North, and later by Jim Farintosh, of Toronto Canada. While learning and practicing paddling and racing techniques three hours a day in camp, he also participated in training sessions which lead to Dragon Boat Racing Coach certification. In order to establish an advanced racing program, he is working with other people with similar aspirations by forming the Dragonboat Racing Association of Colorado (DRACO). He is eager to convey his acquired knowledge to racers who want to paddle more than one weekend a year, enjoy the camaraderie of other racers, enjoy the excitement of competing with some of the premier racing teams in North America. Tom was able to return to the water in 2008 when he coached the Maestas TKD Dungeonless Dragons and raced with them as their drummer. “While we didn’t win any medals, and finished in the middle of the pack, we had a lot of fun and learned some lessons, one of which is ‘we can do better’!” Paddles up, take it away!!