Michael Boyd, Head Coach and Captain of Colorado’s Phantom Dragons / Pink Phantoms dragon boat crew, recently returned from the IDBF Dragon Boat World Championships in Thailand with a handful of gold medals.  Boyd raced as a member of the Team USA Senior C Open crew, an elite group of 60+ year old athletes who emerged victorious in every heat they raced in, capturing gold at each distance category (2000-meters, 1000-meters, 500-meters and 200-meters).  The crew also set a World Record for Senior C competitors at 1000-meters.  The Senior C Mixed and Women’s crews were similarly dominating; the Mixed paddlers won four gold medals, and the Women captured three golds and a bronze.

For dragon boaters, the IDBF Dragon Boat World Championships is the pinnacle event – the equivalent of what the Olympic games represent to more conventional sports.  Winning in Thailand was the culmination of a very extensive and competitive tryout and training process.  The Senior C Crews’ formal training calendar began with well-attended tryout camps in California (October, 2018) and Florida (January, 2019), followed by a week-long training camp in April for those who were selected to the team.  The final two months included “Train & Race” camps in Ottawa (June, 2019) and Long Beach, California (July, 2019) before departing for Thailand in mid-August for several more days of training/acclimation prior to the races.

A video following the 2019 USA Senior C National Dragon Boat paddlers in their quest for gold at the 2019 IDBF World Dragon Boat Championships in Pattaya Thailand is at this link:

Jolane Fenner had the honor of racing as a member of the Team USA Senior B Women’s crew in the 2019 IDBF Dragon Boat World Championships in Thailand, bringing home two bronze medals. An article from the Montrose Press describing her quest to race w/ Team USA can be found at this link:

Dragon Boating on the National Stage

I’ve been Dragon Boat paddling since April 2016 for the Phantom Dragons/Pink Phantoms.

I attended a Pink Hat Tea Celebration for Breast Cancer Survivors with a friend who was a survivor.  I saw the dragon boat display, and decided I would try out as a breast care supporter due to many friends and relatives having breast cancer.  I was immediately hooked on Dragon Boat paddling, and have competed in multiple events in Colorado and Arizona. I love the team spirit and friendly competition. It’s a great sport to promote health and happiness, and collect a little bling! 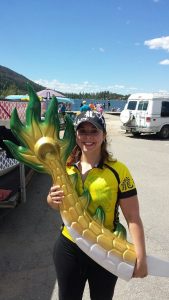 Christina Miranda joined the Phantom Dragons in 2016 after a life-long search for a sport that would not involve balls whizzing straight at her admittedly large target of a noggin. Christina loves the sound of the water swishing off the sides of the dragon boat, and being able to see the finish line while paddling.

Christina has participated in dragon boat races with the Phantom Dragons at the Colorado Dragon Boat Festival in Denver, and events in Grand Lake, Colorado and Tempe, Arizona.  She looks forward to joining the team in more exotic racing locales such as San Francisco and Portland. In her off the water life, Christina is proud to serve in the Air Force Reserves, and at the Colorado Department of Labor.

We continue to make minor improvements to DRACO’s new, second-generation pool paddling simulator (Sinker), and it is proving to be a great hit with our Phantom Dragons and new BCS paddlers.  Below are photos taken during recent practice sessions. 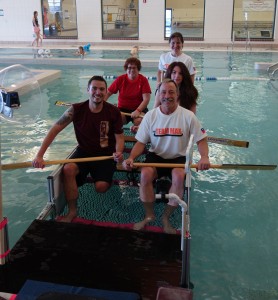 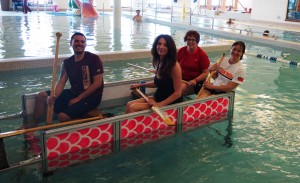 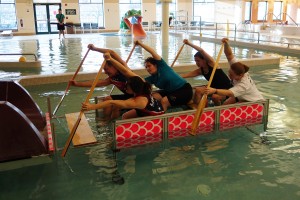 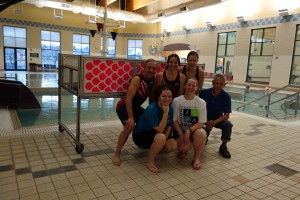 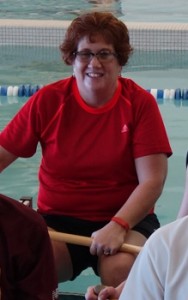 By way of introduction, my name is Sophie Schwedland, a paddler for a local team.  I am a two-time Breast Cancer Survivor for whom paddling & rowing are the only relief I have for my muscles on my reconstructed side.  I have been paddling for 3 months. 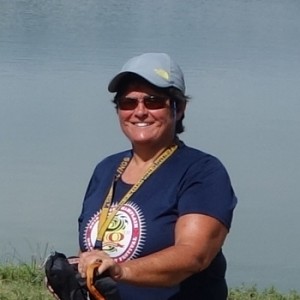 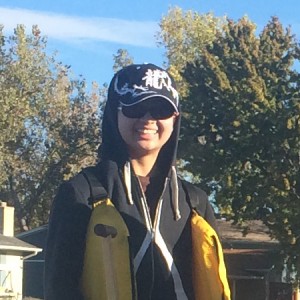